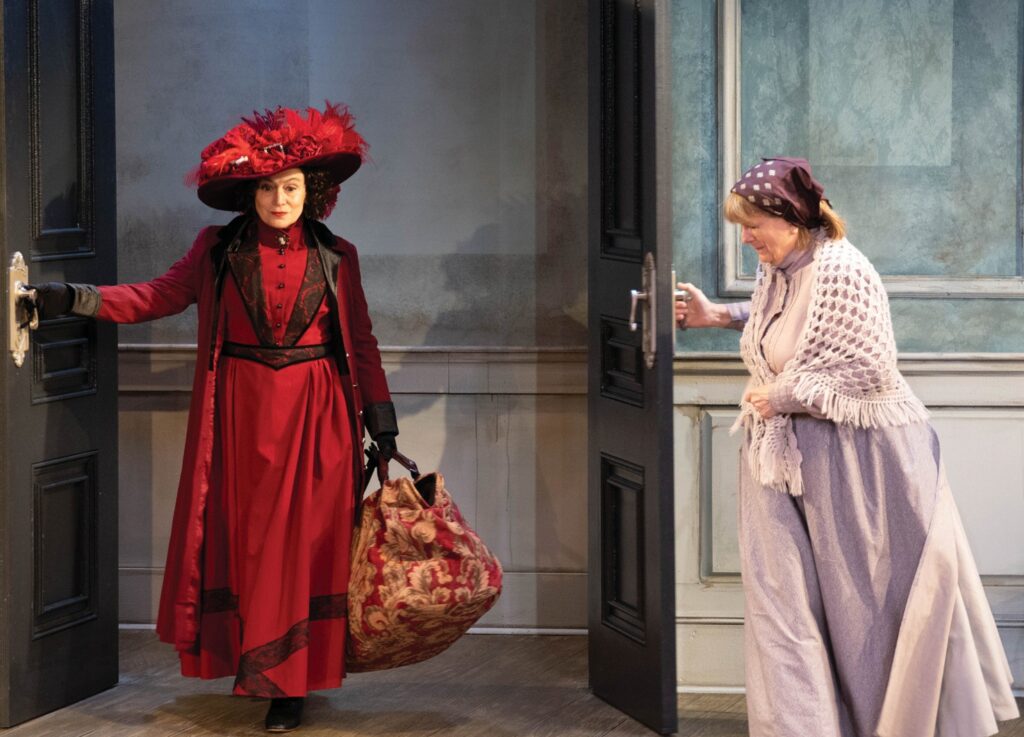 “It’s just so hard — all of this, being with people,” wails Torvald during “A Doll’s House, Part 2.”

And the audience laughs in recognition and agreement.

Because being with others is difficult.

Because people are complicated. And so are our interactions.

It also recognizes the need for personal agency and listening to one’s own voice, another difficult thing to do, especially when you’re a woman and there are so many other voices telling you what to do, how to think and who you should be.

Lucas Hnath’s fresh and humorous play starts 15 years after Ibsen’s classic ends. It’s set in Norway, in 1894, but don’t for one minute think this play is stuffy or boring or even gimmicky. It’s not. It’s smart and funny and engaging.

The opening electronic music (sound designer Katie Lowe) and neon lighting (lighting designer Todd O. Wren) let you know that this is something new and contemporary. 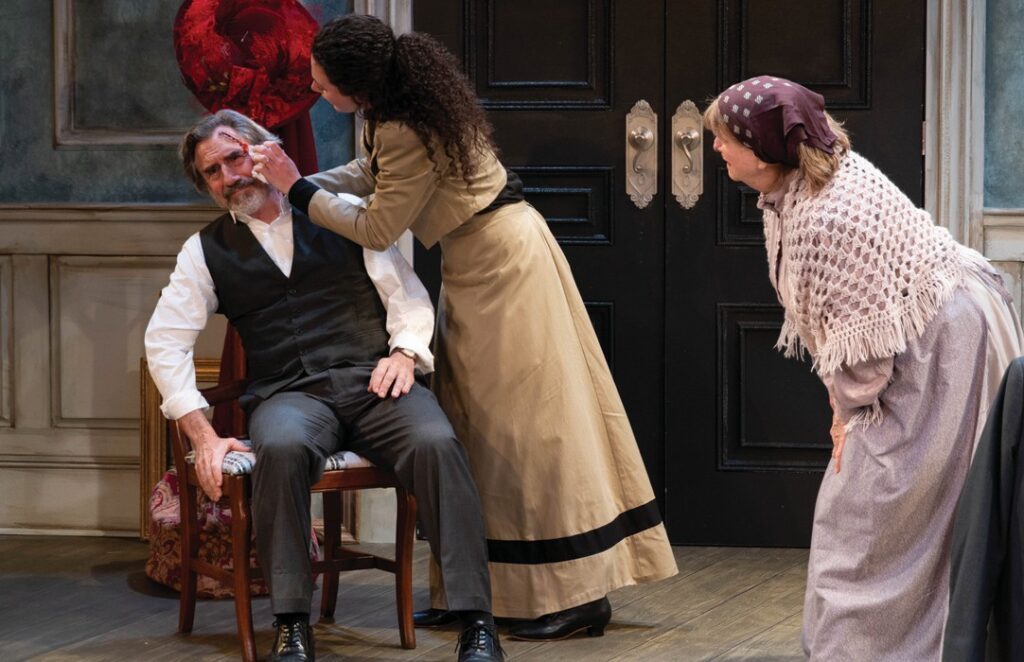 You don’t need to know the original to appreciate this play, though Ibsen’s “A Doll’s House” has been requisite reading in some schools.

The classic tells the tale of Nora and Tolvald’s marriage. Torvald treats his wife with condescension as if she’s a doll or a bird in a cage. But Nora is smarter than her husband realizes. She secretly tries to help him, but her efforts are unappreciated and he berates her when her actions come to light. He tells her that they will just have “a marriage of appearances.”

At the end of the play, Nora walks out on him and their children — the most famous door slam in all of theater.

It was an extremely controversial play during its time.

“A Doll’s House, Part 2” takes place 15 years after. It begins with not a door slamming but with a knock on the same door; it is Nora (Suzanne O’Donnell), returning after being gone for 15 years.

Why has she returned? What has she been doing for all those years, when there were very few options available to women then?

Director Chris Clavelli has Nora and Torvald circling each other onstage like two wrestlers or boxers in a ring. They argue and debate, sometimes briefly addressing the audience as if we’re a jury hearing a case.

Two years ago, the two lead roles were originally played by Florida Rep ensemble members Rachel Burttram and Brendan Powers, husband-and-wife in real life. (Up until recently, their photos were even used in advertising for the show.) But the play was shut down the day after its dress rehearsal, in the early days of the pandemic. A streamed version was made available for a limited time. 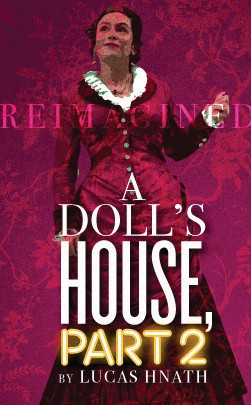 But Ms. O’Donnell and Mr. Breitbarth provide an equally strong, though different interpretation, of the play. And the production benefits from now being staged in the studio theater rather than the larger Arcade Theatre stage.

It’s very intimate; you are actually in the room with the characters, mere feet away from the action.

Bert Scott’s set appears almost bigger than the space itself, with an oversized blue wall and wooden doors. It’s interesting to note that even though Torvald isn’t in financial straits, the paintings are missing from the walls and the furniture covered in drop cloths. It’s as if all art and beauty left when Nora did, 15 years ago. It’s a place in a state of perpetual transition.

All four actors in this production are highly entertaining to watch. It is gripping theater, with generous doses of humor.

Ms. O’Donnell gives us an animated and vivacious Nora, a strong, self-possessed woman, though at one point she sits on the floor just like a doll. Mr. Breitbarth’s Torvald is uncertain, confused, at odds with himself and his wife. A scene when his stolid, Scandinavian veneer breaks is especially humorous to watch.

Ms. Boyle, as the much put-upon nanny, provides laughs with her unexpected cursing. And Ms. Pembroke’s Emmy is infuriating; as a 19-year-old, she thinks she has the world all figured out and life will unfold exactly as she expects it will. She is insufferable.

The four present us with differing views of marriage and familial relationships and responsibilities. (Nora questions whether marriage will even exist in 20 or 30 years.)

“A Doll’s House, Part 2” is one of those superlative nights at the theater where everything comes together perfectly: script, directing, casting, acting, music, set, lighting, costumes.

Audiences may have had to wait two years before finally being able to see it in person, but it is well worth the wait and satisfies in every way.

Sequels are rarely as good as the original, but this is definitely an exception. (And to think that it was written over 130 years later, by a different playwright in a different country.)

This incredible production should not be missed. ¦