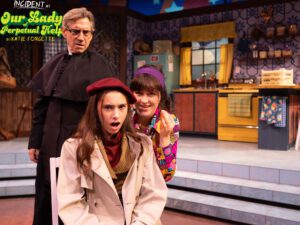 Remember when you first learned about the birds and the bees?

Do you remember where you were, who told you?

In “Incident at Our Lady of Perpetual Help,” (playing at Florida Repertory Theatre Oct. 28-Nov. 13), 19-year-Linda O’Shea is asked by her mother to tell the facts of life to her younger sister, Becky.

But the conversation’s overheard by their parish priest, Father Lovett, and all hell breaks loose.

The play, by Katie Forgette, is a memory play. Linda, who narrates, is looking back at this incident that happened in 1973. She addresses the audience directly, but various family members interrupt to share their memories of the event.

As typically happens, everyone has a different take on what actually happened.

“Incident at Our Lady of Perpetual Help” will be staged in Florida Rep’s main stage, the Historic Arcade Theatre, which has been restored after damage from Hurricane Ian. 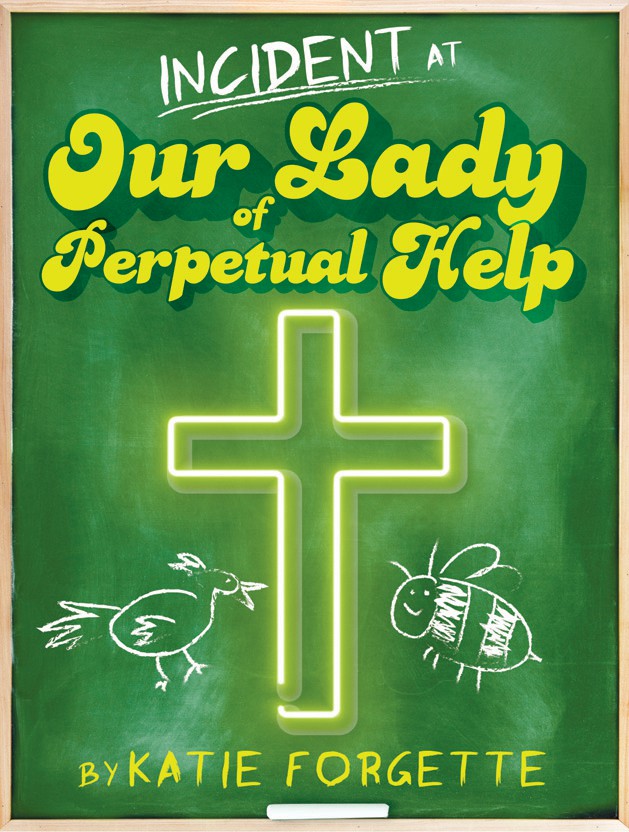 “This is a family comedy, like ‘Brighton Beach Memoirs.’ Simon’s family comedies involve kids, and two or more generations of family members. So this follows that, thematically. It has that face to it, but instead of a Jewish family, it’s a traditional Irish Catholic family.”

But guilt is guilt, no matter what your background is, he says, quoting a line from the play that mentions “Catholic guilt — also known as Jewish guilt, Methodist guilt, Baptist guilt, Lutheran guilt and atheist guilt.”

“No matter how you paint it up or put lipstick on it, guilt is guilt,” Mr. Longenhagen says. “It comes it all shapes and sizes, and runs in all different cultures. It’s funny to see it turned into humor.

“I think it was Mel Brooks who said once that tragedy is when you get a paper cut, but comedy is watching someone fall down a manhole. I’ve always loved that. It’s comedic to watch others deal with their guilt. It’s nothing life-threatening, but it’s funny to watch … how people can become slightly neurotic over things that are debatable whether they’re really that important.”

Mr. Longenhagen loved the play when he first read it, and, being Irish Catholic himself, could relate. (His parents never sat him down and told him the facts of life, he says. He picked them up by osmosis, through the neighborhood kids, friends in school, and his older brothers.)

“I found this among some of the newer pieces. It hasn’t been done a lot. And it’s written by a woman about women, about the female characters. In reading it, I thought: it’s a family comedy, meaning that the funnies in the play have a lot to do with the things that happen inside families, between siblings, among aunts and uncles and parents.”

Even if you’re not Irish Catholic, you can relate, he says.

“I think most people can see behaviors and identify things that happen, and the only way they happen is, these people are related by blood. There are conversations that families engage in that we don’t engage in outside, that uniqueness of communication that comes … within the family.

“Guilt is an amazing thing. It can be truly detrimental, but it can be truly funny. It can also be used to keep your kids on the right track. I grew up with this, and you never want to do is anything that would disgrace your family name. The teenage daughter is put into a predicament. That is classic in a lot of cultures: you don’t do anything to disparage the family name.

But in the end, he says, it all comes down to love.

“Watching the play, there’s love, no matter how awful they might treat each other,” he says. “It’s palpable and powerful and something we all gravitate towards. In the end, that’s what theater is about, is love, if it’s good theater.

“I think this piece is the right piece for any audience, but especially for our audiences, many of whom have lived a full life raising family and dealing with family things. It’s very accessible to them.

“When you have love, you have everything.” ¦

‘Incident at Our Lady of Perpetual Help’