A witty weekend of bad manners delights at Florida Rep

People complain about houseguests from hell, but in “Hay Fever,” Florida Repertory Theatre introduces us to the hosts from hell.

This is, after all, a play by Noel Coward, the king of word play and witty banter.

The action takes place over a June weekend at the Bliss home. All four — parents and children — have, unknown to the others, each invited a guest. When this comes to light, it upsets them all, as they’ve each hoped for private time alone with the one they’ve invited.

“… Now the house will be full of discord — not enough food, every one fighting for the bath — perfect agony!” one complains.

Judith Bliss (Kate Levy), an actress of a certain age, has invited boy-toy Sandy (Seth Andrew Bridges), a younger man who’s infatuated with her. Her husband, David Bliss, a novelist, has invited Jackie (Sydney Torres), a naïve young woman who appears to be even younger than David’s daughter. 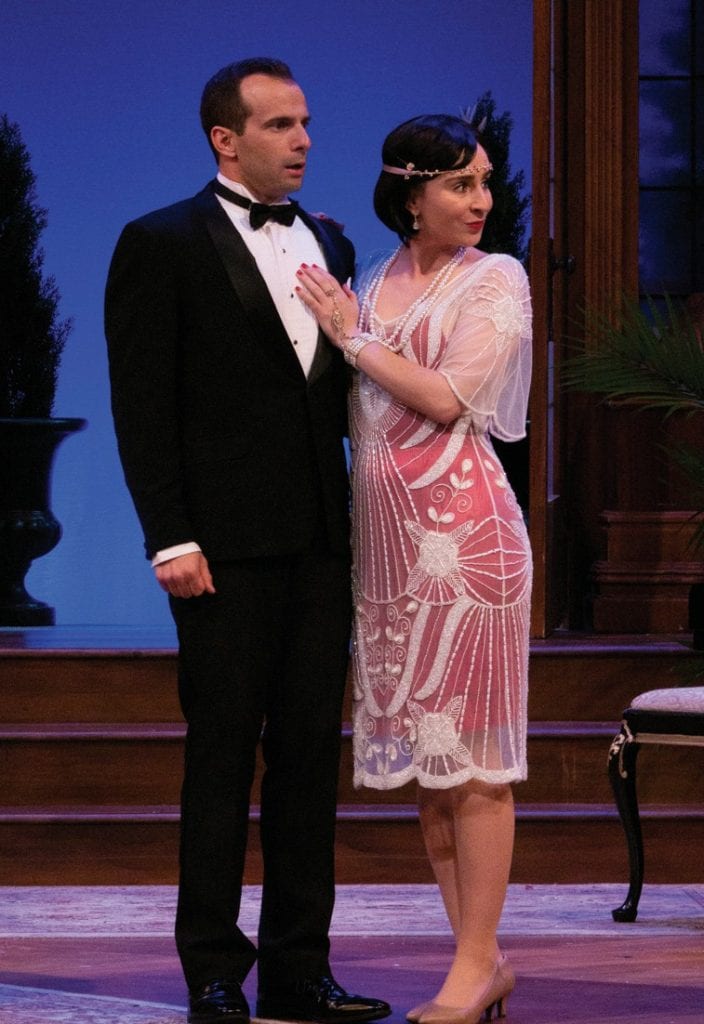 Mix them all together in a house with a very put-upon housekeeper, Clara (Lesley Staples), who wasn’t expecting to cook for eight that weekend, and you have “Hay Fever.”

We’re warned very early in Act I that they’re bad hosts, when Sorel comments to her brother, “We’re so awfully bad-mannered” and “We never attempt to look after people when they come here.”

And that’s exactly what happens.

The family has its own strange way of interacting and doing things. For example, at teatime, Clara brings out a tray with enough cups and saucers for all, but the Blisses only serve themselves as their guests look about in bewilderment.

The playwright referred to his 1925 comedy of manners as “a comedy of bad manners,” and the description certainly fits.

We’re supposed to believe the Blisses are this way because they’re in the arts. David stays holed up in a room, writing his novel. His wife, who’s retired from but plotting her return to acting, doesn’t seem able to distinguish where the stage ends. She’s a drama queen who plays it to the hilt, whether she’s reciting lines or talking in her own living room. It’s as if she believes the spotlight is always on. Ms. Levy plays her well, with droll wit.

Ms. Torres as the young guest plays her character as if at any moment, something is about to shatter and frighten her.

Ms. Burttram’s Myra is a role we haven’t seen her play before. With her marcelled short hair and sophisticated airs, she toys with Simon and flirts shamelessly with his father. She is frank and forthright, speaking in low tones.

Mr. Powers’ formal character brought lots of laughter in a scene where he awkwardly attempts to make small talk, nodding nervously. And a small scene in which he accidentally breaks the family’s barometer is a master class in physical comedy.

Director Mark Shanahan, who is also a comedic actor and playwright, gives each member of the ensemble a turn to shine. Ms. Staples makes the most of a scene where she cleans up the breakfast table teacups, singing, rather off-key, “Tea for Two.”

The set, by Dennis Maulden, would justifiably receive applause if it were revealed behind a rising curtain. But patrons see it immediately upon entering the theater and can study it in depth before the play begins. It’s an extravagant set with multi-levels, a sweeping staircase, a grand piano, a dining table and a fancy recamier as well as a sofa. There are stacks of books here and there and sketches and theater posters on the walls.

Jacquelyn Loy’s costumes are equally as lush, especially in Act II, with the men in black tie and the women in beaded, sequined and fringed flapper dresses.

Audience members seated near me at the preview performance I attended complained during the first intermission about not being able to hear or understand the actors; projection seemed to improve in the following two acts. (And though this is a three-act play, it’s just a matter of structure and the theatrical conventions of the 1920s. It doesn’t run any longer than a typical two-act.)

While “Hay Fever” is about as fluffy and airy as cotton candy, providing a lighthearted night at the theater, the acting is as solid as meat and potatoes.

The Blisses might not think to offer their guests any tea or inquire after their well-being, but Mr. Coward — and Florida Rep — provide theater-goers with a theatrical amuse bouche. ¦